HMD’s Nokia brand is building another flagship smartphone, and unlike the Nokia 8 Sirocco, this one is actually coming to the US. HMD is announcing the “Nokia 9 Pureview” at Mobile World Congress, and it’s got a whopping five cameras on the back. Oh hell yeah!

HMD devices usually live in a price range with very little competition. In thensub-$400 market. the company really only has Motorola to contend with, and it can easily win most of those matchups by virtue of regularly shipping security updates and new OS releases. This is a $700 smartphone, though, and in the cut-throat world of flagship devices, HMD has a lot more competition than it is used to. Does the Nokia 9 stack up well against the $550 OnePlus 6T? Can it really hang in the price range of the $750 Galaxy S10e? We aren’t so sure.

The first concern is the spec sheet. While just about every phone announced at Mobile World Congress this year will be running the new Snapdragon 855, the Nokia 9 is running the Snapdragon 845, a chip that is now fully one year old. By using the old Snapdragon HMD is missing out on a chip that Qualcomm claims has a 45-percent faster CPU and a 20-percent faster GPU, and should be more battery efficient thanks to the change from a 10nm manufacturing process to a 7nm one. In the “save some money” category, the OnePlus 6T will give you the same SoC for $150 less, in the “spend a bit more” category, the Galaxy S10e has the newer Snapdragon 855 for an extra $50.

The front design is also isn’t all that competitive with other phones, either. It’s not ugly or anything, but compared to something like the similarly-priced Galaxy S10e with its hole-punch camera, or the OnePlus 6T with a teardrop notch, the Nokia 9 looks like a phone from last year or even earlier. This is essentially the LG V30 design, and that came out in 2017. HMD is shipping a 5.99-inch, 1440p OLED display in a 155 × 75 × 8.0mm body. The OnePlus 6T gives you a 6.41-inch display in about the same size form factor.

Other specs include an optical fingerprint reader built into the front of the screen, just like the OnePlus 6T, 6GB of RAM, 128GB of UFS 2.1 storage, a 3320mAh battery, IP67 water and dust resistance, and wireless charging.

Nokia’s flagship smartphone is also picking up some of the downsides of modern flagship design. The aluminum sides are nice, but it has a fragile glass rear panel and there’s no headphone jack or MicroSD card. 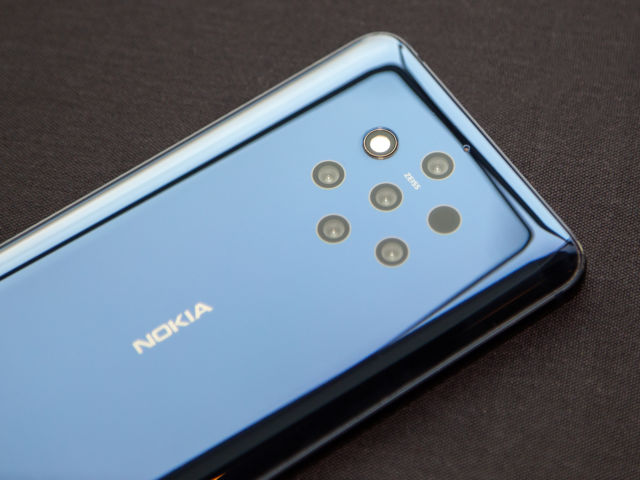 The quintuple lens camera: a hardware-based approach to image stacking 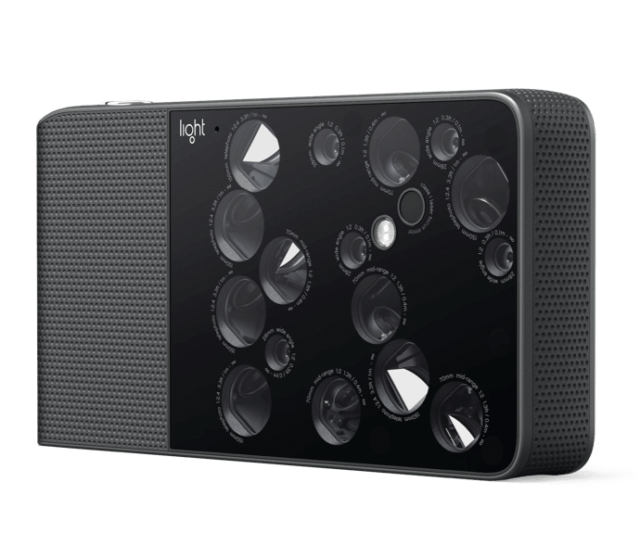 So while the Nokia 9 isn’t going to win any awards for the hardware design, the camera is a standout feature, and the phone will live or die by its photo performance. There are plenty of multi-camera phones out there, but their approach is the equivalent of a photographer’s lens kit—something like the Galaxy S10 has multiple lenses that are all different, and you can imitate a real photographer by swapping from a normal lens to wide angle to telephoto, just like on a DSRL.

HMD’s approach is different. You press the shutter button, and the Nokia 9 takes a photo with each lens, the software mashes all five photos together, and outputs a single, better photo. This is called “image stacking,” and it’s the same technique that Google has been doing on the Pixel and Nexus cameras for some time, albeit with a single lens.

HMD’s hardware-based approach to image stacking comes with some interesting implementation details. You get five lenses—three 12MP monochrome cameras and two 12MP RGB cameras. This has never really been done on a commercial smartphone before, and for good reason. The Snapdragon 845 in the Nokia 9 allows you to connect up to 7 cameras total, but you’re only allowed to use two at once. With just the Qualcomm SoC, HMD’s quintuple camera setup would not be possible.

The Nokia 9 camera is not just built on Qualcomm’s camera interface, though. HMD partnered with the photograph company Light to make the five camera setup work. Five cameras should be nothing for Light; the company has already built a camera with 16 lenses called the L16.  For smartphones, Light has developed an imaging co-processor called the “Lux Capacitor,” and while it doesn’t enable time travel, it does allow you to use up to six cameras simultaneously.

With the Light chipset, the Nokia 9 takes five simultaneous pictures—60 megapixels worth of data—and then downmixes them into a 12 megapixel photo with more dynamic range and better light performance than you could get from a single photo. HMD says the five sensors can collect “up to 10-times the amount of light than a single sensor of the same type.”

Image stacking like this has allowed cameras like the Google Pixel to reach new heights with features like Night Sight, which captures up to 15 shots as single image. Google has a single camera, though, so it’s doing “temporal” image stacking—taking several pictures, one after another, several times a second. Nokia’s simultaneous image stacking should have less trouble with moving objects—something Google has needed to account for in its image processing algorithm. The Nokia 9 can also do temporal image stacking though, which would have five cameras firing simultaneously several times. HMD says it can collect up to 240MP of data (which still gets downmixed to 12MP) which would suggest the five 12MP cameras take four shots each, for a total of 20 frames of data.

The multi-camera solution also enables some interesting alternative camera modes. Since there’s are several monochrome sensors, you can take real black and white photos without needing to resort to a filter. In depth mode you can take a “full 12MP depth map” that contains 1200 different layers of depth. This all gets bundled up into Google’s “GDepth” depth map format and uploaded to Google Photos, where you can adjust depth of field and add bokeh days, weeks, or years after a photo is taken.

The multiple layers of depth should result in better depth shots. The Google Pixel’s portrait mode only computes for two layers of depth—the subject and the background—so the entire background is evenly blurred. That’s not how depth of field works though. With 1200 different layers of depth instead of two, things that are further away from the camera can be blurred more, and things that are closer can be blurred less. HMD said it had to team up with Google to make all this work in Google Photos, since it is really pushing the limits of Google’s GDepth format with so many layers.

There are lots of fun things happening in the camera software, too. The downmixed photos can be saved in RAW DNG format before they get crushed into a lossy JPG, so you can load the RAW file into a photo editor and have a decent amount of information to play with. HMD teamed up with Adobe to make a camera profile for the Android version of Lightroom, so you can accurately develop photos right on your phone. HMD also has a new Pro Camera UI on the Nokia 9, allowing for exposure times of up to 10 seconds (you’ll definitely need a tripod), time lapse photography, and lots of manual mode adjustments.

How to Install Pixel Experience Android Q on the OnePlus 6

Huawei’s P30 Pro is here! A camera beast with a tiny notch

No Result
View All Result